What Do You Know about Modern Fencing? 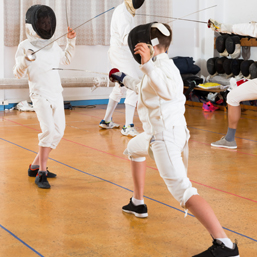 Modern fencing is the Olympic and Paralympic sport where athletes compete in one of three disciplines named after the ‘sword’: foil, epee, or sabre. This, of course, is not a sword or a weapon, but modern sporting equipment derived from historical predecessors. The basic goal of fencing is to score a point while avoiding a ‘touch’ from your opponent.

Depending on the type of fencing, different parts of the body are considered valid (counting for a point). The origins of the rules for modern fencing derive from the principles of attacking and defending in correct time and distance to make the attack and defence practical in combat or duel. Fundamentally, fencing is a game of problem-solving. Your opponent presents the problem of defending your attacks, and the solution is to time your attack in a way that is difficult for your opponent to maneuver out of the way or avoid with defensive movements called a ‘parry’ (the use of the foil, epee, or sabre to block). Fencers understand when to give ground, when to attack. Choosing the wrong moment to attack, getting too close to your opponent, or allowing too much space for your opponent to advance and attack allows your opponent a better opportunity to score.

Fencing is scored electronically. When a touch is made, a scoreboard lights up to indicate a touch was scored. The referee calls a stop to the action and awards a point before resuming the match. Olympic-level matches, called bouts, have a time limit of nine minutes, divided into three periods of three minutes, and end when time expires or when one fencer scores 15 points.

The disciplines of fencing

Each of the three disciplines, foil, epee, and sabre, has its own characteristics to captivate the imagination, talents, abilities, and personality of its practitioners:

1. Foil. In foil, fencers use a light flexible weapon that in its early days was ‘foiled,’ blunted, as it was designed purely as a sporting device. Modern foils have an electronic button on the point that is depressed on the target (torso) of the opponent that triggers a signal on scoring equipment to indicate a touch was made.
2. Epee. Epee fencing’s target is the whole body. The epee (lit ‘sword’ in French) has a similar mechanism that verifies an opponent has scored a point.
3. Sabre. Sabre is the sprint of fencing, characterized by fast movements with touches above the waist counting for points. Typically, in sabre, the side of the blade is used to score by making the slightest contact with the valid (above the waist) target.

In fencing, your child physically uses every part of their body. Fencing also encourages participants to learn to think analytically - they need to observe, analyze, adjust constantly, and learn quickly as they develop as an athlete. But most importantly, fencing is a lot of fun!

Fencing activities in groups emphasize physical fitness, skill development, and social interaction based around an incomparable experience. Fencing provides the opportunity for your child to practice and excel in an accessible, individual sport within a group environment. It’s a win-win!

Among the fundamental rules of fencing is the respect for opponents and teammates, as well as regard for the rules and order of fencing, which have been well-established since the early origins of the sport hundreds of years ago.

Typically, younger fencers (under 12 years old) go to five or 10 points. A typical practice for new fencers may be an hour, but longer practices are the norm as fencers progress. In the city of Calgary and region, you can find fencers competing regularly, with events about each month that run from September to May. At local events, fencers get six to 10 bouts every competition they enter. It’s a great way to learn and to take information back to the practice to continue improving.

Fencers are not required to participate in competitive programs, but for many, the chance to challenge their skills against others has a lot of appeal. Most clubs offer a variety of programs from recreational to competitive training.

Fencing in the modern form has existed for over 100 years with many advances in equipment safety. Many clubs provide the equipment, offer rentals, or can supply reasonably-priced options to lower barriers of entry for those unfamiliar with the sport.

A basic mask, glove, and fencing jacket worn for a class will run $200 to $250, while the cost of equipment for tournaments would be around $500 to $650, depending on the discipline.

Rental could be $25 to $35 per month, but some clubs may allow beginners to borrow gear. For new fencers, renting is a great option. Purchasing the gear once your young fencer demonstrates some commitment to the sport beyond an initial course or session is recommended.

Give fencing a try!

Many fencing clubs offer opportunities to try a one-on-one lesson with a certified coach or to try a short course of several weeks for your child to see what fencing is like and to discover what discipline of fencing is most suitable for them.

Young children (toddlers) lack some of the motor skills required for fencing. The attention and concentration of developing children makes fencing better suited to those ages seven and eight and older, but there are always exceptions!

The typical fencer often starts between the ages of nine and 12, but some clubs offer classes for younger fencers with modified (plastic and lighter) equipment. Many competitive athletes start in their teens, as young adults, or adults, but fencing can be started and learned at almost any age.

The fencing community in Calgary is experiencing growth in many different clubs, along with school and community programs that make the sport of fencing accessible to families throughout the city.

All Sport One Day or club open house events are popular and allow participants to try fencing as an activity to get a feel for the sport. Summer camps are also a wonderful way for your child to experience modern fencing for the first time, too!

Contact your local club for more information about opportunities to try fencing and to find the right program for your child.