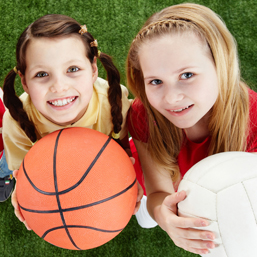 While sports can provide a multitude of emotional and physical benefits for kids, specializing in a single sport at too early of an age can pose risks. How do you know when - or if - your child should specialize in a sport they love?

What is sports specialization?

Brian Harvey, O.D., a pediatric sports medicine physician, says that sports specialization is defined as playing and competing in one single sport exclusively for more than eight months out of the year.

You may worry that your child won’t have a competitive advantage later on if they don’t specialize early.

Karen Hughey, co-founder and CEO of Team Cura, works with scholarship-seeking athletes and their parents. As a former sports parent, Hughey says her children played a variety of sports. She and her husband left it up to their children to decide which ones they wanted to pursue as they got older.

Although he was a talented golfer, her son Rob, co-founder of Team Cura, opted to quit golf early in his high school career to participate in other activities. But, by his junior year, he decided that he wanted to return to golf and play at the university level. “He had to work harder to reach out to coaches at that point, but he still was fine. He found a great school and a great fit for himself. So, leave it up to your kids. They’ll find their way and figure it out,” says Hughey.

“We see that kids who have had experience playing a multitude of sports have fewer difficulties learning new skills and, generally, don’t suffer from the overuse injuries and burnout that are common with youth athletes specializing in one sport,” says physical therapist Tim Cummings, PT, DPT.

Cummings says the most common overuse injuries he sees in his younger patients include ankle sprains, knee pain, Little Leaguer’s Elbow, ACL tears, and Osgood-Schlatter. “Osgood-Schlatter is a traction injury on a special type of growth plate called an apophysis, which is at the top of the shin bone. The traction comes from strong and relatively tight muscles that develop during puberty and high activity levels. Pain, and sometimes swelling, can be felt directly over a bump at the bottom of the knee,” explains Cummings.

Participating in different sports throughout the year is easier on developing bodies, and kids are less likely to get bored or even anxious or depressed. “Athletes wanting to perform at their best, but not being able to, whether it’s due to injury or their fear of disappointing a coach or a parent or even themselves, plus that chronic daily physical demand, can lead to higher rates of burnout and quitting their sport,” says Dr. Harvey.

To allow the body time to rest and recover, kids shouldn’t train for more than eight months out of the year. “And really try not to practice, train, or compete more than their age in years per week,” says Dr. Harvey. (For example, no more than 12 hours per week for a 12-year-old.)

Striking a healthy balance between sports and other interests is also beneficial. “Some of the high school athletes we work with have stressed the importance of needing downtime and being able to spend time with their friends,” says Hughey.

Whether they toss a football around with friends, shoot hoops in the driveway, play tag, or make up competitive games, kids develop motor skills, creativity, and social/emotional skills through unstructured play. “When we start to look at young athletes, the body really needs time to develop, learn how to run, learn how to jump - really learn how to use their bodies and play. Instead of focusing on one exact sport, try a little bit of different types of sports. Learn how to be athletic first and foremost, and then really have fun with those sports,” says Dr. Harvey.

“This isn’t a black and white, good or bad issue. Sports, like figure skating, gymnastics, rhythmic gymnastics, and diving require early specialization due to the high demand to acquire specific sports skills early on. Peak performance in these sports most often happens before reaching full physical maturity,” says Cummings. But, he emphasizes that early specialization combined with decreased recovery time does put an athlete at increased risk for overuse injuries, no matter the sport chosen.

Dr. Harvey recommends gauging your child’s specialization readiness according to their physical and mental maturity. Although he’d prefer kids to wait until they are at least 12 (ideally, 14 or 15), “there’s probably not a specific age that I would say is perfect,” he says.

Dr. Harvey says a child who is physically and mentally ready to specialize:

Above all, “you’ve got to listen to your child,” says Hughey. Countless coaches have told us that you will know when the time is right. If you’re pushing it, it’s not the right time.”

Christa is a nationally-published freelance writer. She and her husband are the parents of two active sons.