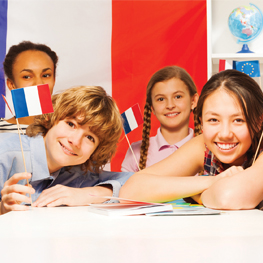 Myth #1: It is better for children to master their first language before attempting a second language.
False. Starting immersion in Kindergarten (or ideally, even before Kindergarten) provides students with the best chance of developing true fluency and bilingualism. Young children’s brains are more flexible than adolescent and adult brains. Young children are able to integrate new vocabulary much more seamlessly. An early start also means that students do not learn the target language as a translation of their first language; rather, they see it as its own standalone structure with different grammar, syntax, and expressions.

Myth #2: Attending French immersion will delay or permanently stunt a student’s reading, writing, and verbal communication skills in English.
False. Generally, immersion students score better than their English-speaking- only peers on English exams, including the Alberta Provincial Achievement Test of English Language Arts (administered in Grades 6 and 9), and the Alberta Diploma Exam administered in Grade 12. Being exposed to multiple language enhances students’ grasp of language as a concept, which strengthens their performance in all languages.

Myth #3: Attending French immersion until the end of elementary school provides an adequate foundation for students to return to the language later in life. (Interestingly, this myth co-exists with Myth #1, although they directly contradict each other.)
False. While six or seven years of immersion provides a better foundation than the core French model, the reality of language acquisition is more exposure leads to more fluency. Just as sixth graders have not yet mastered the entire complexity and nuance of their first language, they have not yet had enough time to be truly fluent in a second language. Students who leave before graduation miss out on many years of exposure to richer vocabulary, higher-level conversations, and frequent practice.

Myth #5: French immersion should only be considered by families where one parent is able to help with French homework.
False. French immersion is designed for students who do not speak French at home. Homework should be assigned such that students can complete it independently; parents can help by providing a quiet study spot, appropriate materials, and implementing a consistent homework routine.

Myth #6: The primary advantage of French immersion is having an edge in the business world as an adult.

False. There is no denying the practical advantages of a second language, there are a host of other less tangible but even more important perks. Research shows that second language learning enhances focus, increases problem-solving skills, builds empathy, and encourages openness to other cultures and ways of life. Having a strong second language makes it even easier to learn subsequent languages: Students learn to triangulate from their first two linguistic models to grasp the structures and syntax of a third (or fourth or fifth) language.

Myth #7: A French immersion setting means less time and resources are allocated to math and science.
False. French immersion classroom time is allocated very similarly to that of English classrooms, with a comparable number of minutes designated to math and science instruction, especially in the early years. Additionally, teaching these subjects in the target language provides students with exposure to higher-level vocabulary and opportunities to problem-solve collaboratively while using their second language.

We know that being bilingual in Canada opens more doors. We live in a society that is constantly evolving and where advantages are tied to success. Being able to communicate and work in French and English is an obvious advantage. This advantage, however, requires commitment, perseverance and hard work. By enrolling your children in French immersion, you are giving them a tremendous gift. Continuing with French Immersion until graduation is a gift your children give themselves.

Amy Murray and Nicola Camirand are the principals of the early childhood and elementary divisions, respectively, at the Calgary French and International School (CFIS). CFIS is an independent preschool to Grade 12 French immersion school. For more information, visit cfis. com, email This email address is being protected from spambots. You need JavaScript enabled to view it., or follow on Instagram at @ECEatCFIS (early childhood) and @CFISelementary (elementary).