Pandamoneum! Why the Calgary Zoo will Welcome Four Giant Pandas in May 2018

Written by Calgary Zoo; Photo: Courtesy of the Toronto Zoo 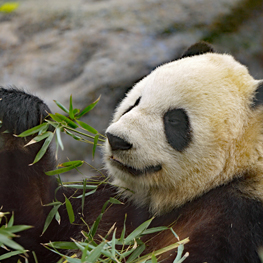 Arriving in May, the Calgary Zoo is welcoming giant pandas for the first time in 30 years! For Albertans that recall the Calgary Winter Olympics of 1988, that event coincided with a cuddly seven-month visit of two giant pandas, on loan from China. The situation was nothing other than pandamonium - a thrilling time at the Calgary Zoo that was “Panda Magic.”

For years, giant pandas have captured the world’s collective imagination with their distinctive markings, friendly faces, and unique diet. As a global symbol for wildlife conservation, the struggle of the pandas native to China has become a survival story heard around the world. In 2017, these beautiful bears were officially downgraded on the International Union for Conservation of Nature’s (IUCN) Red List from Endangered to Vulnerable after years of effort to save the species. The down-listing of giant pandas is considered a success of international collaboration and positive momentum in giant panda conservation efforts.

Why are giant pandas returning to the Calgary Zoo?

Get to know the Calgary Zoo’s giant panda family!

Er Shun (adult female), Da Mao (adult male), Jia Pan Pan and Jia Yue Yue (adorable twin cubs) are coming from the Toronto Zoo where they’ve been visiting for the past five years. As China’s national animal, giant pandas are found at very few zoos outside of China - in fact, these four are the only giant pandas in Canada! Pandas will stay at the Calgary Zoo for five years before returning home to China, so it’s time to make the most of this panda staycation.

Visiting the Calgary Zoo will be a full panda experience, with the newly-renovated Panda Passage building in the centre of the zoo. This main habitat will also house the zoo’s Komodo dragons and Bactrian camels, and will feature incredible new educational programming, photo opportunities, and events, like having Breakfast with the Pandas! There will be a lot to learn, and if you’re an Engage and Inspire zoo member, you get a home-court advantage with fun sneak peeks and member previews in April, which means panda visits before anyone else. Get ready - the cute is coming.

As a not-for-profit charitable institution, the Calgary Zoo is a conservation leader whose mission is to take and inspire action to sustain wildlife and wild places. A portion of membership and ticket purchases go toward feeding and caring for the animals, enhancing the facilities, and supporting local and global conservation efforts to protect species at risk. #ourzooyyc #calgarypandas. Visit them on Facebook, facebook.com/thecalgaryzoo, and Twitter @calgaryzoo.