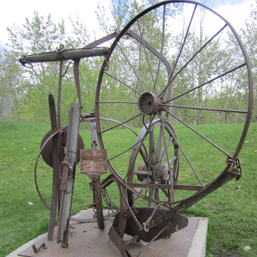 When you think of downtown Calgary, a number of images come to mind: busy business people rushing to their next meeting, concrete streets full of bumper-to-bumper cars, metallic buildings reaching into the sky. Things that probably don’t top the list are: legendary lions, 1,000-kilogram bucking bulls, and gold mountains, but each of these also call Calgary’s Core home in the form of art pieces scattered throughout downtown’s streets and parks.

As a born-and-raised Calgarian, when I learned there are more than 60 prominent pieces of art downtown that I have barely noticed, I was motivated to take my family on a walking art tour of the Core to learn about the artists who have contributed to the diversity of our metropolitan. Admittedly, my family had no idea where to start, so our informal guide came in the form of the Calgary Downtown Art Guide, (calgarydowntown.com/imagedir/File/Art_Walk_Brochure_PDF(1).pdf), which we used to plan our route and navigate the artworks that were plotted on a conveniently color-coded map for easy reference.

1. Prince’s Island Park. For the first of many art adventures with my family, we decided to tour Prince’s Island Park. The island is home to no less than six impressive art installations, including Bird in Flight (Peter Smith, 1972), an untitled metal piece by Ben Mcleod (1987), and a three-piece sculpture installation by Enzo DiPalma (1969) called Prairie Progression.

Arguably the most noteworthy sculpture on the island is Cracked Pot Foundations (1964), a geometric stone piece made by Katie Ohe, one of the first artists to create modern sculpture in Alberta.

Another installation that my son was immediately drawn to was An Auspicious Find (Lori Sobkowich, 2004). The piece includes 15,000 glass marbles encapsulated in perforated and riveted steel flora and fauna set on stone columns. When sunlight passes through the marbles, four pixelated images are created, according to the Guide.

What surprised me the most about the tour was my four-year-old daughter’s genuine interest in the art. Despite the distractions of the island, she was truly intrigued by many of the art installations and asked questions such as, “What is that one made of (Untitled by Ben Mcleod)?” and “How did they get the marbles in there (An Auspicious Find by Lori Sobkowich)?”

Sien Lok Park, located in Chinatown just across the river from Prince’s Island, also contains many artworks that have an educational element, including In Search of Gold Mountain (Honsun Chu, 1999), the granite monument at the centre of the park that represents the proud history of Chinese settlement in Canada.

2. 7th Avenue SW. The area around the CTrain tracks between 1st and 5th Streets contains a number of iconic artworks including a piece with the unusual name Do Re Me Fa Sol La Si Do (Joe Fafard, 2010). The installation is composed of eight powder-coated steel cut-outs of larger-than-life horses in different poses representing movement: past, present, and future, according to the Calgary Downtown Art Guide.

A bronze statue of Outlaw (Richard Loffler, 2010), the Calgary Stampede’s legendary Brahma bull, stands a few blocks from the train outside of Fifth Avenue Place. In 71 trips out of the chute, Outlaw was only ridden for eight seconds once by Justin Volz, earning him the title of one of the “rankest” bulls in rodeo and my daughter’s favorite statue on the tour.

Perhaps one of the most iconic art pieces in downtown Calgary is Conversation (William McElcheran, 1980). The sculpture of two men in hats having a discussion was inspired by “wheelers and dealers on Bay Street Toronto,” according to the Guide.

3. 9th Avenue SW. A number of Calgary’s most famous art pieces live within a six-block radius near 9th Avenue. An installation that’s hard to miss is Nuova Twist by Beverly Pepper (2010), as the sculpture stands 18-feet tall and 12.5-feet wide at Bankers Hall Court and “looks like a melting U,” according to my daughter.

Another notable stop near 9th Avenue is Municipal Plaza. This can stand as its own quick and kid-friendly art tour as there are many pieces in a small, easily walkable area. Here you will find a Family of Horses (Harry O’Hanlon, 1989), the very colorful Balancing Act by Roy Leadbeater (1989), Natural Engineer by Don Begg (1987), and a memorial sculpture of Chief David Crowchild (Robert Stowell, 1988).

The plaza is also home to one of the original lions from the Centre Street Bridge. The concrete lion was one of four big cats sculpted by stonemason James L. Thomson in 1916-17. When the bridge was renovated in 1999, the lions were removed, restored, and one was placed in front of the Calgary Municipal Building. This big guy was my two-year-old son’s favorite piece by far.

If it’s photo-friendly art pieces you are looking for, Calgary has more than a few Instagram-worthy installations including:

If you are looking for something fun and educational to do with the family this summer, create your own walking art tour in downtown Calgary. You are sure to learn something new about art techniques, installations, and artists - and perhaps you will come to view downtown in a different light.

Stacie is a freelance writer, photographer, and mother of a delightful daughter, and silly son. She thoroughly enjoys telling stories and is the co-founder of Sentiments Photobooks, which helps busy parents capture their family’s memories without the hassle and time commitment of making their own photobook; for more information, visit sentimentsphotobooks.ca.