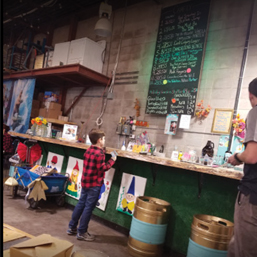 The days of bringing your baby to a bar being taboo are over (thankfully!), and there is no longer a need to get a babysitter if you want to enjoy a fun afternoon at one of Calgary’s amazing breweries. Craft breweries have been popping up at a rapid pace since the Alberta Government changed regulations to abolish the minimum production law in late 2013, and our city is now host to dozens of brewing establishments. With this influx of craft breweries comes a welcome change in the cultural drinking scene with many breweries becoming more family-, and even dog-, friendly in response to demand from their customers. “Breweries are community gathering places and need to be open for everyone,” says Ben Leon, managing director of The Dandy Brewing CompanyTM. “The culture of craft beer is not that of night clubs. They are much more like the classic small- town pubs in England, where families gather and spend time together every week.”

1. The Dandy Brewing Company: 2003, 11 Street SE; thedandybrewingcompany.com. Dandy takes its commitment to including kids seriously and hosts a number of family-friendly events throughout the year including Neighbour Day Pine Car Derby, Canada Day celebrations, an annual Stampede breakfast, and hosting a skateboard competition that is open to skaters under 18. These events include outdoor games, sidewalk chalk, snow cones, bubbles, and much more family fun.

My family and I attended the Canada Day celebrations and my kids (ages four and two) had a blast playing cornhole, blowing bubbles, and scarfing down bright red snow cones in the parking lot that is converted to an outdoor patio for special events. They also have high chairs, offer kid-friendly modifications to many of their menu items, and make their own sodas for the kiddos.

2. Revival Brewcade: 1217B, 9 Avenue SE; revivalbrewcade.com. Another brewery that is just a hop, skip, and a jump away from Dandy is Revival Brewcade. This nano brewery has a rotating selection of hand-picked retro arcade and pinball games from the ‘70s, ‘80s, and ‘90s. They also have a large selection of board games. “It’s important for parents to get out and do the things they enjoy,” says James Dobbin, co- founder of Revival. “We want to make adults feel like kids again, so it’s great to see them do that and share the experience with their own children.”

My kiddos lined up for the Pac-Man game and also enjoyed ‘playing’ the board game called Twins. Despite the many entertainment options, the most kid-friendly thing about Revival’s is the menu. With favorites like chicken fingers, tater tots, grilled cheese, pop tarts, cereal and milk, and even candy, it is the most child- approved menu of any brewery I’ve visited.

3. Cold Garden: 1100, 11 Street SE; coldgarden.ca. Two blocks from Revival is another notoriously family- friendly brewery: Cold Garden - although it’s better known for including the furry family members in the fun. Because of its limited food licence, Cold Garden allows dogs in the brewery and on the patio.

My kids loved seeing all of the puppies almost as much as they enjoyed the colorful and eclectic décor, including hundreds of pool noodles, retro furniture, and large, mirrored pineapples and flamingos. Cold Garden has a limited snack menu but there are a number of food trucks that park nearby and customers can order food to the brewery.

Dan Allard, one of the founders of Cold Garden, says the craft beer boom is encouraging more and more people to explore craft beer for flavor, rather than simply drinking beer for intoxication. “This behavior shift should be exposed to as many youths as possible before they become the legal drinking age, so they can see alcohol being consumed responsibly,” he adds.

4. Brewsters: various locations; brewsters.ca. No list of family-friendly breweries would be complete without mentioning Brewsters - one of Alberta’s longest-standing local breweries with 11 restaurants across the province. The casual atmosphere, children’s menu (complete with coloring/activity page and crayons) and T-shirts starting at size 12 months that say ‘Half Pint’ make it an obvious choice for parents.

“We wanted to provide an alternative to the standard neighborhood pub, where people could experience great craft beer close to home and also bring their kids along,” says Deirdre Lanigan, owner of Brewsters. “We think local craft breweries should be community-focused and be a place for everyone within the community, which includes families.”

5. Annex Ale Project: 4323, 1 Street SE; annexales.com. The Annex Ale Project is another clear choice for an afternoon out with the littles. In fact, the Annex team got its start making soda. “We started making soda to pass the time while we waited for our brewery licence to come through in 2016 - and we’re pretty glad we did. These brews are crowd-pleasers - from your fussy four-year-old to your pedantic papa,” according to their website.

The sodas they are most recognized for are their award-winning root beer and ginger beer. The best part is you don’t have to feel bad about giving these sodas to your kids. They are vegan, gluten-free, and craft produced and contain no high fructose corn syrup, artificial flavors or colors. Annex has a limited snack menu, but you can bring in your own food or order in.

Stacie is a freelance writer, photographer, and mother of a delightful daughter and a silly son. She enjoys telling stories and is the co-founder of Sentiments Photobooks, who helps busy parents capture their family’s memories without the hassle and time commitment of making their own photobook. If you would like to capture your memories without the work, visit sentimentsphotobooks.ca.