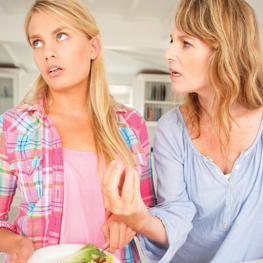 Psychologist G. Stanley Hall famously described the teenage years as a “storm.” But the teen tempest is foreshadowed by some early storm warnings during the tween years: unsettling new behaviors like blatant eye-rolling, public back-talk and peer worship. These wearing attitudes darken the horizon like threatening clouds during early adolescence - and make parents want to run for cover.

What makes previously pleasant children turn mouthy and defiant after age eight? It’s not bad parenting, says Alyson Schafer, psychotherapist and author of Ain’t Misbehavin’. But these behaviors are a form of revolt.

“Rebellion only exists in relationships where people are in a superior/inferior relationship. Eventually the person in the inferior position rises up, and that’s what we see with tweens disrespecting their parents.”

If storm clouds are brewing at your house, don’t batten down the hatches. Take these steps to tame unruly tween ‘tudes, starting today:

1. The slouch and shirk. Exaggerated eye-rolls, slouching, shirking parents’ gazes - non-verbal rebellion is a tweenage specialty. “This is a natural developmental time to push against authority, even about something as simple as posture,” notes Schafer. “Slouching and slumping are a way of defying society’s rule to ‘sit up straight’ even if your parents never asked you to.”
How to help - Recognize that it’s not (always) about you: “Parents can take their child’s attitude personally, when the behavior is more of a general statement about all authority,” says Schafer. Treat an eye-roll or a slumped stance as an invitation to uncover what’s genuinely bothering your child.

2. The slick lip. From a mumbled “Yeah, right,” to a sassy showdown over chores or homework, back talk peppers tween language. What’s really going on when kids talk back? According to Schafer, tweens don’t consider mouthing off to be back talk - they think they’re defending themselves. “Tweens are telling parents, ‘If you can talk to me that way, then I can do the same to you!’”
How to help - Back talk shouldn’t be ignored because it signals an underlying problem (even a minor, fleeting one like frustration over a missed soccer goal or a bad grade). But shooting back more angry words only fuels the fire.
Responding with, “I can see you’re upset right now. Let’s take some time to cool off. Do you want to spend time alone, or would you like me to stay with you?” gives both parties a chance to step away from the problem and regroup. Once tempers are diffused, raise the issue in a neutral tone and work toward resolution, recommends Suzanne Roberts, a licensed family therapist.

3. The mall meltdown. You’re waiting to pay for a purchase, sitting down at a restaurant or leaving a school function when it happens: Your tween unleashes a defiant diatribe that makes heads turn (and your stomach drop). All eyes are on you - what now? Public parental humiliation is a time-honored tween tactic because tweens know that parents may be more likely to cave in the glare of the spotlight. “I don’t know any parent who hasn’t had this happen to them,” says Roberts.
How to help - Too often, parents react to the shame they feel instead of the actual situation at hand. “We’re afraid of being judged by strangers,” says Roberts. Instead of getting burned in the heat of the moment, cut the outing short and remove the child from the situation. Hear your child out when everyone’s anger has mellowed, and provide a logical consequence (like, “The next time you want to go to the mall, we’re not going”).

Prevent these trying scenes in the first place by setting a parameter for the outing before leaving the house. Decide in advance how much money will be spent, how long you’ll stay and what constitutes acceptable behavior for the trip.

4. The mood swing. Living with a mercurial, moody tween is no picnic. One moment, your child is a sunny sweetheart. The next, a rage-filled zombie. But don’t blame your child - blame a growth spurt in the brain around 11 to 13 that impacts mood and behavior. With rapidly changing bodies and minds, kids lack the impulse control and emotional regulation to deal with stress adaptively, and lash out at parents instead.
How to help - Don’t try to problem-solve when kids are at the unpleasant end of the mood spectrum. “When we’re angry, our brains are taken over by a fight-or-flight response and we can’t respond appropriately,” says Roberts. Ask your child to put a numerical value on their anger, from 1 to 10, and make a family rule to take a cool-down break if anyone tags their fury at 5 or higher.

5. The peer package. You used to be the epicentre of your child’s life, but lately, there’s a new focal point: peers. These days, your child is dressing, talking and acting more and more like their pack of tween pals. Worse, they seem to prefer their company to yours. What gives?
How to help - As painful as it may be, parents need to let out the leash a bit more with tweens, says Schafer. “Tweens will choose your company less often, so you need to find other ways to stay connected during this time.” To maintain a strong connection that will stand the test of peer power, try meeting tweens where they are chatting, texting, sharing computer games, shopping or simply listening.

“Ultimately, respect is a two-way street, and tweens who don’t feel respected are more likely to dish out disrespect themselves. If we can approach our children from a standpoint of curiosity instead of judgment and really work to uncover what’s driving their behavior, that’s so helpful,” says Roberts.

“When someone feels understood, it changes the whole dynamic of the relationship.”

• Listen without replying. Really hear what your child says and accept that it is their reality. They may have a chip on their shoulder or a grudge they are bearing. Find out what it is.

• Create a signal. Decide you want more mutual respect in the family. Create a signal - like touching your nose - to employ when either party feels disrespected.

• Problem-solve. View discipline issues as problems that need solutions instead of children that need punishment. Have family meetings and ask tweens to contribute to household rules. Kids are more likely to comply with rules they help to set.

• Strengthen bonds. Think back to a time when things were going well with your tween. Where were you? What were you doing? Create more of those conditions and rituals to build a stronger bond.

Malia is a nationally-published health and parenting journalist and mom of three. Her latest book is Sleep Tight, Every Night: Helping Toddlers and Preschoolers Sleep Well Without Tears, Tricks, or Tirades.