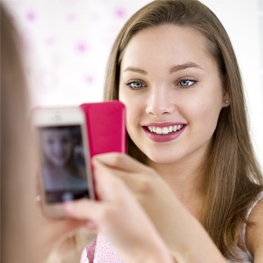 Raising a daughter who’s happy in her own skin isn’t easy. For years, parents have worried about the unrealistic way women are depicted in media, advertising, pop culture and even video games. Many try to counter this influence by pointing out to their daughters that commercial images of women are often manipulated by people hoping to make a profit.

(Excellent information about the connection between traditional media and body image is widely available online. Check out the research at geenadavisinstitute.org, the infographics at representationproject.org and the interactive game at mypopstudio.com.)

Social media poses different challenges, largely because girls themselves are creating and commenting on their own images. This gives them tremendous power - and makes them hugely vulnerable. On platforms like Instagram, Facebook, Snapchat and Twitter, appearance can become a competitive sport as girls vie for emoji, ‘likes’ and followers.

Selfies, in particular, push girls to compare themselves with peers at their prettiest, and it doesn’t take long to figure out that the fastest way to get more ‘likes’ is to be thin, skilled with make-up, dressed in revealing clothing or positioned in a provocative pose. A recent survey by Common Sense Media found that among teens who post online, 35 per cent are worried about being tagged in unattractive photos; 27 per cent feel anxious about their appearance in posted photos; and a quarter take it personally when their photos are ignored.

Parents may not be able to dominate the conversations about appearance that are going on in social media, but they can and should comment. Girls need to hear from mothers who have come to terms with their own body issues and fathers who appreciate women for more than their faces and figures.

Here are some things to keep in mind:

Don’t dismiss. For better or worse, people do make judgments about each other based on how they present themselves physically, so your daughter’s concerns about how she looks are valid. And for girls who constantly see images that have been filtered and photoshopped to match an ideal, the curves and pimples of puberty can feel like a crisis. Parents cannot change the prevailing culture, but you can help your daughter think clearly about two things: First, how much will she allow herself to be influenced by what others think about her looks? Encourage her not to give power to those who don’t deserve it. Second, how will she evaluate others? Help her understand that other, less visible qualities - integrity, intelligence, sense of humor, compassion - are more important than appearance.

Be aware of the awful. Yes, there really are pro anorexia (pro-ana) and thinspiration (thinspo) websites that encourage girls to starve themselves and praise them when they post emaciated photos. Yes, girls post ‘Am I Pretty?’ videos on YouTube and, perhaps unsurprisingly, attract the attention of trolls. Yes, there are apps like ‘Hot or Not’ that exist simply to rate the physical attractiveness of users. Although many girls are turned off by these sites, others are susceptible to their appeal.

Point out possibilities. Social media gives girls more opportunities to find allies who will encourage them to be themselves, without conforming to other people’s ideas about how they should look. Some girls, for example, post what they call ‘uglyselfies,’ unadorned photos of them, which mock conventional ideas about beauty. Others post photos that emphasize accomplishments or insights instead of appearance. Girls can also follow female celebrities like Lorde and Emma Watson who have been outspoken about the way representations of women are manipulated and exploited.

Critique photos. A photo can capture a ‘real’ moment or it can be a performance. Talk to your daughter about how she chooses the photos she decides to post online. What is she trying to express about herself? What kinds of editing techniques does she use and why? What kind of feedback does she hope to get? How will she feel if people misunderstand what she is trying to communicate? You can ask similar questions about the photos her friends post online. Do specific photos capture what she likes about her friend or their relationship? Do other photos make her uncomfortable?

Filter feedback. Teens long for feedback from peers - as long as it is positive. Negative comments can be crushing, so parents need to help children develop defenses. Rather than accepting hostile or cruel comments as objectively ‘true,’ teach kids to understand them as a reflection of the other person’s state of mind. People who are happy with themselves don’t feel the need to attack others. Encourage your child to be constructive in her own comments - supporting and encouraging other girls instead of tearing them down.

Get real. Positive role models have an enormous effect on kids. Be sure your daughter knows plenty of real-life women who are comfortable with themselves. Surround her with female role models: grandmas and aunts, teachers and coaches, your own colleagues and friends. Talk about the accomplishments of these women and the qualities you admire in them.

Although it may not seem that way in adolescence, appearance is only a fraction of a girl’s identity. You can mitigate the impact of social media by talking often about all the other things you value about your daughter. Help her find activities she enjoys and people who appreciate her for who she is. Model a lifestyle that includes a balanced approach to eating and exercise. Most of all, create a family environment in which every member is respected for who they are and what they can do rather than how they happen to look on any given day.

Carolyn Jabs, M.A., raised three computer-savvy kids including one with special-needs. She has been writing Growing Up Online for over 10 years, and is working on a book about constructive responses to conflict. To read other columns, visit growing-up-online.com.