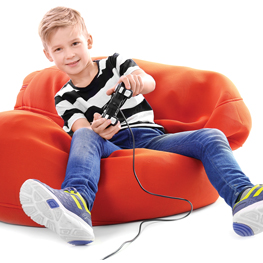 It’s time for karate class,” I said to my 13-year-old son. “Do I have to go?” He asked. “Yes,” I said. This has been a common exchange between us for a variety of activities over the past 10 years. He has tried everything from baseball to cooking class - yet nothing holds his interest as much as video games do. Every now and then I wonder if it is worth investing the money and time into the activities or sports he doesn’t want to participate in. But if I hold off on signing him up for things, he does nothing except play video games until we try something new again; it’s a never-ending cycle.

Is playing video games healthy for your teen?

There is a lot of conflicting information about video game use amongst teens, so it can be hard for you, the parent, to know what to allow. It’s screen time, of course, but video gaming is often also a social activity played together with your teen’s friends either in the same room or online. And if it’s a popular pastime amongst your teen’s peer group, you may be inclined to let your child play for an unlimited amount of time with their friends.

“Playing video games can have positive benefits,” says Dr. Larry D. Rosen, professor and author of The Distracted Mind: Ancient Brains in a High-Tech World. Gaming “can offer some skill-building, including reaction time, executive functioning, and strategic thinking,” says Dr. Rosen. He cautions, though, “Playing video games can be very addictive and create problematic thinking, including desensitization to violence.”

Dr. Rosen recommends that video game play should be limited, since research shows physiological arousal increases when playing video games - and kids need breaks from that. He suggests limiting gaming for teens to 60 to 90 minutes at a time, even if you decide to allow more total gaming time daily.

Maria Sanders, licensed social worker and certified parent coach, also recommends creating clear boundaries with your teen regarding when and how long they are allowed to play. She says an example of boundaries might be letting your teen choose to play an hour of video games either before or after completing their homework.

She encourages parents to learn more about their teen’s interest in video games. Sit down and play the games with them. “The child will see that you have an interest in what they are doing,” she says, “and you will learn about why they are so attracted to the game.”

Teens should live “balanced lives and not live solely  in the video game,” says Sanders. But if your teen  doesn’t express interest in anything else, it may be  difficult to figure out which activity or sport to encourage. Sanders suggests asking your teen about the type of video games they like to play. Then you might be able to figure out an activity that uses similar skills or gameplay. An avid Fortnite player, for example, might enjoy a laser tag league.

Parents should avoid announcing which activities their teen must do. Rosen stresses the importance of including the child in the decision-making process. With your child’s input, create a list of the types of activities they could do at home during unstructured times or when they feel bored. Similarly, involving your child in discussions about organized extracurriculars will prevent them from feeling forced into participating in certain activities.

Often, a parent makes comments like, “Video games are a waste of time” or, “Video games are unhealthy” in an effort to decrease their teen’s video game use. Rosen says this almost always backfires. Instead, reward your child for their responsible behavior. For example, when your child demonstrates they can stop playing on their own without you badgering them, you might loosen strict time limits on your child’s screen time.

Instead of making negative statements about video games, says Sanders, “The best thing a parent can do is guide their child down a path of self-reflection. Asking questions like, ‘I notice you seem pretty tired after playing video games. How are you feeling?’ will help your child figure out their own beliefs about video game use.”

Parent negativity can make a teen feel as if they are being judged and misunderstood. Focus on your teen’s strengths while they are playing a video game - perhaps, for instance, their ability to help a friend get to another level in a game. You should notice your child’s abilities and point out how those abilities might connect or help them out in real-life situations. The next step? Help your teen get out in the real word and do just that: use their abilities for good.

Too many video games - when to worry

Some signs parents should look for are:

If you are concerned about your teen, contact a mental health professional to discuss counseling options.

Cheryl Maguire holds a Master of Counseling Psychology degree. She is married and is the mother of twins and a daughter. Her writing has been published in Parents Magazine, Upworthy, Chicken Soup for the Soul: Count Your Blessings, and Twins Magazine. You can find her on Twitter @CherylMaguire05. This article was originally published on Your Teen.