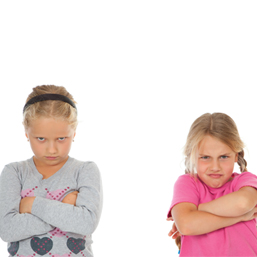 We’ve all seen an older sibling hug the baby a little too hard. We’ve witnessed a weary parent’s unsuccessful attempts to referee yet another round of, “He stole my toy!” Like many parents, I wanted to avoid these scenarios when I became pregnant for the second time, so I took my oldest son to sibling classes and included him in baby preparations. Once we became a family of four, I attempted to divide my time and attention equally. I hoped that this strategy would encourage sibling harmony, but wondered if my efforts would matter. Thankfully, experts confirm that parents can significantly impact sibling relationships. “Parents can make a difference,” says Adele Faber, author of Siblings Without Rivalry: How to Help Your Children Live Together So You Can Live Too. “Our attitude and words have power. We can lead rivals toward peace,” she says.

Evolutionary influences - A recent Oakland University survey found that 35 percent of adult siblings have a hostile or apathetic relationship. Scientists believe this rivalry has an evolutionary component. Children may compete over a parent’s time and attention because humans are hard-wired to protect essential resources. Fortunately, nature proves that living things must cooperate to survive. This is clear when baby lions snuggle for warmth and practice hunting skills against one another. Smart parents boost collaboration and discourage competition because the strongest families function as a cohesive team. While one person’s success benefits everyone, conflict weakens the family.

Perceptions of favoritism - Although parents may vow to treat their children the same, each child is different. An effective approach for one child may be a disaster for another. Unfortunately, children can mistake these adjustments for preference or favoritism. To avoid misunderstandings, highlight each child’s value by honoring what makes each child unique. Don’t deny diversity, celebrate it.

Early conflict-resolution - Routine sibling conflict is healthy. Dr. Laura Markam, author of Peaceful Parent, Happy Siblings: How to Stop the Fighting and Raise Friends for Life, says “the sibling relationship is where the rough edges of our early self-centeredness are smoothed off, and where we learn to manage our most difficult emotions.” These benefits make it tempting to allow children to negotiate for themselves. But they rarely have the skills needed for conflict-resolution. Show kids that loving families do not solve problems in physical ways. Nor do they belittle one another. Instead, they listen, negotiate, and compromise.

When negotiations fail - Children who understand expectations can become effective negotiators. Still, parents should intervene when one child hurts another. Be careful not to model the behavior you wish to discourage by making accusations. Instead, use descriptions like, “I see two angry children who need a break.” Then separate the kids until things cool down and discuss how to improve the next time.

Limit labels - Experts caution that children may internalize negative phrases. For example, a child chastised for being a ‘bully’ may assume that they will always be the aggressor. To counter this, parents might use creative spin during an intervention. Instead of labeling a child’s behavior as mean-spirited, tell your child that you know them to be kind. If a sibling complains, “Sam never shares and is selfish,” your response might be, “Try asking him differently since we both know he can be generous.”

The power of self-esteem - Most children sometimes feel like the least favorite. So why do some kids shrug off perceived slights while others develop severe sibling rivalry? Often, it comes down to how a child feels about themself and their place in the world. Children who feel competent and valued are less likely to engage in or create conflict. A child with high self-worth can brush off perceived favoritism.

Lasting rewards - No one else shares your child’s history in the way a sibling will. No one else understands the events that shape who you are. Siblings “serve as witnesses to what occurred and provide vital links to the past,” says Linda Sonna, Ph.D., and the author of The Everything Parent’s Guide to Raising Siblings: Tips to Eliminate Rivalry, Avoid Favoritism, and Keep the Peace. Facilitating loving sibling relationships is a long-term investment. While a parental relationship may last for 30 to 50 years, the sibling bond can span 80 years. It’s easy to prioritize this relationship when you realize that the brothers bickering today may be the elderly men who share each other’s triumphs and burdens tomorrow.

Author Shannon is the mother of two sons with very different personalities. Thankfully, they usually treat one another with mutual respect.