Connecting with other parents 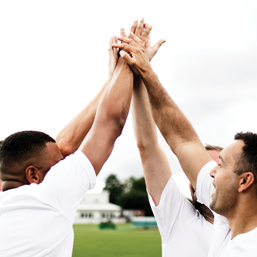 I was listening to a podcast the other day about why adults don't make friends as easily. The psychologist being interviewed said it's due to a lack of unplanned fun and moments of vulnerability.

When we were at school, it was easy to make friends. We just had to ask “can I play?” which was usually answered with a “yes” and a quick run through of the rules. As adults, we simply don’t ask that.

Why not? Because that would be weird.

What if it wasn’t?

As I write this, I just realized that perhaps the answer is to remove the stigma of asking “hey, can I play?”

At the park, when my daughter sees a child around the same age as her, I encourage her to go up to them and introduce herself. Through that interaction (which we want to become instinctive) I usually give a tight-lipped half-smile to the other parent. That’s my introduction to them, followed by a “how’s it going?” From there, the conversation may develop between us parents depending on how the kids connect and continue to play.

My daughter is a conduit to all parents for me. Somewhere along the way, I’ve lost my ability to introduce myself without having my cute kid to present in the dynamic.

We really should mix things up.

Here’s a scenario. A few guys are kicking a ball around in a park. Usually, I would be a bit sad and go home to look up how to join a local soccer league, or if there are any amateur baseball teams that need a new pitcher, or hitter, or something. (I don’t know the words, I’ve never played! But it can’t be that hard, right?)

But what if, next time, I walked up to the group of other adults who are just as neurotic and self-conscious as I am and asked if I could join in?

Now the weather is getting warmer (finally!), let’s make it a mission to walk up to a group of other

parents and show our kids how to introduce ourselves. Let’s use the lessons our parents taught us all those years ago. Nice clear voice, stand up straight, hands out of our pockets, and say “hello, I’m James, mind if we play too?”

James is a busy dad and creator of SocialDad.ca. He lives in North Vancouver, BC and tries to spend as much time outdoors as possible.