Playing Nice in the Snow and Ice: Stopping Winter Sports Injuries in Their Tracks 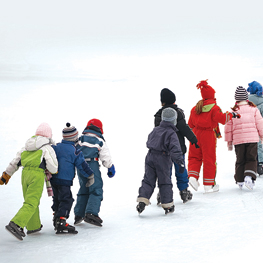 Crisp winter air, brisk exercise and rosy cheeks; cold-weather activities like skiing, sledding, snowboarding and ice hockey seem to epitomize wholesome winter fun. It’s true; these activities promote fitness and allow kids to burn off pent-up winter energy. But according to Kevin D. Walter, M.D., a sports medicine program director at a children’s hospital, parents are often shocked to learn about the dangers involved. With rates for winter sports injuries climbing, Walter and other health experts are now warning parents to take precautions to keep their children safe when they participate in time-honored winter pastimes like skiing and sledding.

Why are winter sports so potentially dangerous?

“Any time you have kids traveling down slick snow and ice at high speeds, there’s a risk of injury,” says Joe Guettler, M.D., orthopedic surgeon at Beaumont Hospitals. Children are more susceptible to falls than adults because their heads are relatively large in proportion to their bodies, and their centre of gravity is higher, he says. And young bones have growth plates - areas of fibrous material where new bone is generated - that make them more prone to break than adult bones.

Don’t let fear of injury keep your family inside this winter. Some general safety precautions can help prevent injuries for all winter athletes, from casual sledders to daredevil snowboarders. To stay safe, all kids should wear proper protective gear - especially a well-fitted helmet - and play by the rules of their respective sport. Warming up for 10 to 15 minutes also reduces the likelihood of injury by preparing muscles, tendons and ligaments for work.

To further protect your children from winter sports injuries, follow these sport-specific strategies:

Skiing - According to Walter, skiing-related injuries often involve the anterior cruciate ligament (ACL). Tears or injuries to this ligament are often painful and can put kids out of commission for the season. “I’m seeing more ACL injuries in young skiers these days,” says Walter. “Children are being pushed harder to play and train more aggressively at a younger age in all sports.”

Play it safe – All equipment, including skis, boots and bindings, should be properly fitted. Kids should avoid walking around too much in ski boots, as this can compromise their snug kit, and be extra attentive when getting on and off the ski lift, a time when many injuries happen. It’s also a good idea to end the day on an easier run to avoid skiing fatigue.

Sledding - Collision is the biggest injury risk for sledders, says Guettler. And collisions can lead to catastrophic head injuries. “Parents think of sledding as a relatively benign activity,” he says. “But there are real risks. Bones and ligaments, we can put those back together. But a head injury can cause lifelong damage.”

Play it safe – Because most collisions occur when sledders lose control of their sled, always choose a sled with a steering mechanism. Never allow sledding in wooded areas or near streets, and don’t allow children to walk across the sledding path. And helmets are a must.

Snowboarding - Because of the way snowboarders fall, knee injuries are seen less frequently with snowboarders than with skiers, says Guettler. Upper body injuries are a bigger concern, particularly wrist fractures, he says. And, as with other downhill sports, head and neck injuries, like a concussion, are a possibility.

Play it safe – Along with a protective helmet, snowboarders should wear wristguards to protect against fractures. Kids shouldn’t attempt tricks or runs that exceed their ability level - particularly late in the day when fatigue sets in. All gear, especially bindings, should be checked regularly.

Ice Hockey - With more than 500,000 young participants nationwide, hockey is one of the country’s fastest-growing youth sports. Hockey helps develop hand-eye coordination and packs a vigorous cardiovascular workout, but its fast pace can set the stage for injuries to the head, mouth, limbs and groin.

Play it safe – Young players should be able to confidently skate both forward and backward before suiting up to play. Protective gear is particularly important in this quick-moving contact sport. Never let your child play without a protective helmet, hockey-specific shoulder, elbow, knee and shin pads, hockey pants with built-in padding (also called “breezers”), gloves, an athletic supporter or cup and a mouthguard.

Taking a few extra minutes to stay safe is worthwhile, because winter sports are fitness boons for kids and families. Just ask Guettler, who skis regularly with his four young children.

“Unlike other sports like football and gymnastics that relegate parents to the sidelines, winter sports allow families to have fun and stay fit together,” he says. “The positive family time and the fitness benefits certainly outweigh the potential risk for injuries.”

Malia is a nationally-published freelance journalist  specializing in parenting and health.