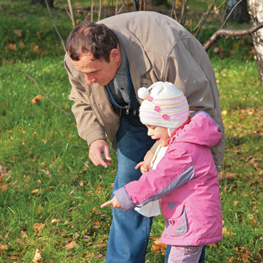 You’ve picked up your child from their twos, threes or fours program, with the rest of the day or the weekend ahead of you. Now what? It’s a common dilemma. “So many parents ask me, ‘What do I do with my child when we get home?’” says Elissa Sungar, a former preschool teacher at Stanford University Laboratory School and the co-creator of www.ifnotyouwho.org, a free website that guides parents through 300 short and fun daily activities to help them make sure their child is ready for Kindergarten.

It turns out there’s a lot you can do to help your child keep learning all day long and it doesn’t involve workbooks or writing letters over and over. Instead, it’s about playing and interacting with them to develop the cognitive, physical, language and motor skills they’ll need to be prepared for ‘big school.’

Kindergarten-readiness is vital for a child’s long-term academic success. Consider this: It’s estimated that of the millions of children who enter Kindergarten each year, half are behind their peers socially and academically, which increases the risk of failure in school. Of the half who aren’t prepared, up to 40 per cent won’t finish high school. “So much brain development occurs before age six. You want your child ready for Kindergarten and you want your child’s classmates to be ready so they can challenge your child,” says Sungar. “We need everybody on board.”

Parents play a major role in the process and the subtle shifts in how you interact with your child can make a big difference.

Here are three things you can do now to help your preschooler become a capable learner:

1. Let your child take the lead. When playing with your child, it’s tempting to take over, as in: “Now it’s time to dress the baby doll. Now it’s time to give the baby a bath.” “Many adults think play should be a certain way,” says Sungar. But that’s limiting. To enhance a child’s creativity and confidence, guide them instead. “While you’re playing with your child, narrate what your child is doing, ask questions about why she’s doing what she’s doing and what comes next, as in: ‘Now, you’re giving baby a bath. What’s baby going to do after her bath?’” says Sungar. Letting your child run the show gives them a sense of control, which helps develop their thinking skills and solve problems on their own. If they have a tough time getting the baby undressed, for example, don’t do it for them. “It’s critical to let kids explore, learn from their experiences and fix problems as they happen,” says Sungar.

2. Give explicit feedback. Throughout your child’s day, give specific praise and negative feedback. Instead of saying, “good job,” for example, when your child shows you a picture they painted, you might say, “I like how you used the blue and the red paint. Those colors mix well together.” Similarly, if your child decides to stand up on a chair, instead of saying, “sit down,” say, “Please sit on your bottom. When you stand, you can fall off the chair and get hurt.” Get the idea? Giving your child pointed criticism and advice is more valuable than vague remarks because it gives your child direction and helps build their vocabulary. The more words, the better. “The actual number of words kids hear each day is crucial to their long-term development,” says Sungar. Save one-word negative feedback, such as “No!” or “Don’t!” for safety issues, such as when your child runs out into the street or tries to touch a hot pan. It’s more effective if they hear “No!” or “Don’t” less often.

3. Allow free play. Each day, give your child the space to do their own thing. “Preschoolers need at least four hours per week - up to roughly half-an-hour each day - of unstructured play-time other than preschool,” says Sungar. Downtime allows children to think creatively and gives them a mental breather. “It’s exhausting to have very little unstructured, self-directed time and kids need more than adults do,” says David J. Schonfeld, M.D., director of the division of developmental and behavioral pediatrics at the Cincinnati Children’s Hospital Medical Center. Without downtime, kids can feel overwhelmed by the increased pressure to succeed at school, which can start as early as preschool.

Overscheduled kids may not know what to do or how to play by themselves. If that’s the case, give your child options, such as: “Would you like to draw or play with blocks?” Then, go do what you need to do and check back in with your child occasionally. Keep the TV turned off as well as your smartphone or tablet. Even if your child’s favorite app is ‘educational’, your child isn’t learning through a physical experience when they’re using a screen. “Preschoolers learn a lot with their bodies and need to try something, fail at it and then try something new,” says Sungar. “When they’re just using their thumbs or index finger on a touchscreen, they’re not using the muscles in their hands, for example, which are crucial for holding a pencil, using scissors and throwing a ball.”

Three things to do with preschoolers

Each of these activities helps develop your child’s cognitive and fine motor skills, but your child will just know they’re having fun.

When you need a time-out: fill up the bath tub. Preschoolers love to splash around in water as well as pour it, strain and transfer it from one object to another. So plop your child in the tub along with items from your kitchen, such as plastic cups, a turkey baster or a strainer or just give them a sponge. Squeezing a sponge or turkey baster and transferring water from one cup to another enhances fine-motor development. Stay in the bathroom with your child, but feel free to sit back and watch the supervised fun unfurl.

Another idea: Fill ice cube trays with water and add one drop of food coloring to each cube. Let the cubes freeze overnight. Then pop one or two ice cubes into your child’s bath water and watch your child have a blast mixing the colors.

Another fun tub-time activity: Add a drop of food coloring to little plastic bowls filled with shaving cream and give your child a paint brush or let your child explore it with their hands on the side of the tub. When you’re making dinner: have your child make tinfoil letters. Ask your child to squeeze a sheet of tinfoil into a skinny tube, then see what they can do with it. Can they make a circle? A triangle? A letter, like a B? Be sure to show your child what a circle looks like if they don’t know or point to letter examples on food labels.

When you’re waiting anywhere: have your child go on a letter hunt. Bring along a magazine or the newspaper and have your child circle letters, numbers, animals or people with a marker.

Sandra is an award-winning freelance writer who delivers expert advice and the latest developments in health, nutrition, parenting and consumer issues. Her most recent book is Save a Bundle: 50+ Ways to Save Big on Baby Gear.