For the Love of the Blankie - Should You Wean Your child from a Prized Lovey? 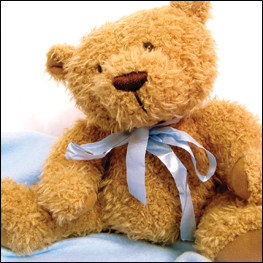 While pushing her stroller through a downpour with her son, four, hunkered on the buggy board and her daughter, two, snuggled under the stroller’s rain tarp, Karen Conklin didn’t notice her daughter’s favorite pink blanket slip out. When Conklin finally arrived home, her relief was short-lived when she realized in horror that Annie’s “pillow pod” was missing.

A few days later, she was able to head back out to hunt for the blanket. To her astonishment, she found it. A thoughtful stranger had draped it over the wall near the train station. “Whoever it was must have known just how important this blanket was,” says Conklin.

Nearly 60 per cent of children feel soothed by some kind of transitional item, security object or lovey. From threadbare blankets, raggedy cloth diapers and matted teddy bears, loveys come in all shapes, sizes and conditions. Psychologists say that security objects are a healthy way for kids to cope with separation from parents and ease into new situations.

Nonetheless, many parents wonder how to best handle the attachment to these much-loved objects as their kids grow older. How old is too old?

Typically, most children give up their pacifiers by age three or four, but stuffed animals and blankets can linger much longer, usually until adolescence and sometimes even into adulthood.

C. Lee Reed says her daughter steadfastly refused the charming pink blankets she offered her as a baby, preferring the cloth diapers Reed used while breastfeeding.

“We grew to call it the ‘Magic Clothie’. No matter how upset she was, we could simply pull out the cloth, touch it to her face or place it over her head and instantly she fell silent. Craziest thing ever and oh, so cute,” says Reed. Her now 16-year-old daughter still sometimes sleeps with the remnants of her favorite lovey.

Chris Starnes, a mom of three, says she’s held onto her nearly threadbare “Blankie” since childhood. She laughs remembering how she told her husband before they married: “It’s a package deal... you get me and you get my weird blanket problem!” Although she no longer sleeps with her blanket, she keeps it safely within eyesight perched on a shelf in her bedroom closet.

Security objects may remain important, but as kids grow older, they naturally begin to leave the objects of their affection behind, safely secured at home. Dr. Mark McKee, a child psychologist and author of the book Raising a Successful Child: The Manual, says by the time most kids enter Kindergarten, they can part with their lovey during the day.

“There may be exceptions and some children may carry a reminder, such as a cut-off corner of a blanket or something else in their pockets, which continues to help them to independently calm fears and anxieties, without anyone the wiser,” he says.

If you hope to begin distancing your child from their attachment to prepare them for school or simply want to avoid the risk of losing a precious lovey, ask them to set aside a spot for it in their room. They can cuddle it when they are in their room, when they are alone, or at naptime or bedtime.

“This boundary cuts out transitional objects in the car, at preschool or on playdates,” says Dr. Fran Walfish, a family psychotherapist and author of The Self-Aware Parent: Resolving Conflict and Building a Better Bond with Your Child.

But never take away the object to punish your child. “These are not objects to use for motivation or discipline, and must remain off-limits in such matters,” says McKee.

You may wonder if you can get rid of a tired-looking lovey if your child appears less interested in it. Ask your child if they’re ready to part with it. Never give a security object away without talking to your child first.

“This is a high-risk way of saddening or enraging your child. Always have open, truthful dialogue,” says Walfish.

When your child is ready, put the lovey in a box in the garage, and hold onto it for six to 12 months until you both decide what to do with it. Overall, remember that often kids develop an attachment to an object because they associate it as having similar soothing, loving qualities as their mother or another caretaker.

“It is crucial that parents understand the deep importance, pleasure and security the transitional object provides for their child,” says McKee. “At the same time, rest assured that you will recall the power of the object significantly more than your child after they become grown!”

• Dirty Wow Wow and Other Love Stories: A Tribute to the Threadbare Companions of Childhood by Cheryl and Jeffrey Katz

• The Red Blanket by Eliza Thomas

Freelance writer Christa is the mom of two boys, who both had loveys at one time or another. One carried around a toy windmill and the other has yet to fully part with his beloved blanket.