Language in the First Year – A Road Map for Speech Development 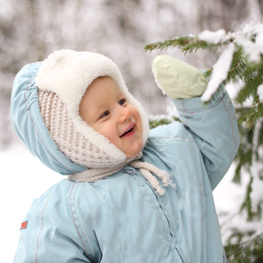 There are few things more exciting as a parent than watching your child’s ability to communicate with you grow and blossom. Between birth and age three, children’s language skills develop dramatically, and there is often a wide range of normal when it comes to children saying their first words. “The typical benchmark for a child saying their first word is 12 months old, but it’s often analogous to when children take their first steps. There can be wide age variations as to when children say their first words,” says Ellen Meyer Gregg, a Professor of Audiology and Speech-Language Sciences. Here’s a road map to help guide you through the early years of speech-language development:

Language in the first year

A newborn’s cries are the earliest form of communication. When you respond appropriately to your infant’s cries, your child learns to expect a response. From birth through 12 months, reciprocal communication patterns develop between you and your baby. For example, your baby might coo or babble, you respond back and your baby coos again.

During the first year, your baby might play a game with you where they drop something, you pick it up and then they drop it again. This type of game playing also lays a solid foundation for communication, because it’s reciprocal, says Gregg.

If your baby doesn’t seem to be hearing well or responding to sounds, especially loud sounds, you may want to consult your pediatrician. Children who have had multiple ear infections may have difficulty acquiring speech-language skills, although this isn’t always the case. Another cause for concern is if your child is averse to social interactions and doesn’t want to make eye contact or be touched.

“Usually, the best place to start is with your pediatrician. If you’re not comfortable with the doctor’s response, then it’s time to consult a speech-language pathologist who holds a certificate of clinical competence,” says Gregg. Visit the Canadian Association of Speech-Language Pathologists & Audiologists website at www.caslpa.ca for more information on how to find a certified speech-language pathologist in your area.

A vocabulary explosion in year two

From one year to 18 months, a child’s vocabulary usually increases from one word to around 50 words. Most children have a core group of words they like to use, such as “no” and “more”.

By age two, there’s usually a vocabulary explosion with most children being able to say 200 to 250 words, although two year olds understand many more words than they can say. At around two years, children also start putting two words together, such as “more cookie” or “baby up”. Between 27 to 30 months, children put together early sentences with a subject, verb and object.

“The period between two and three years old is amazing. It’s like your child acquires a new word every day. The difference between a two-year-old, two-and-a-half-year-old and three-year-old in language development is dramatic,” says Gregg. “By age three, a child usually has pretty good conversation skills, a good vocabulary and is saying sentences with a lot of information packed in them.”

At around age two, some children are language late bloomers; they understand most of what’s being said to them and interact appropriately with the world around them, but they’re not talking a lot. If you are concerned about your toddler’s language skills, a speech-language pathologist can evaluate your child’s social interaction skills and hearing status. Often a child who is a language late bloomer will be communicating effectively by age three.

Your child might like to read the same book over and over again - and with good reason. Children learn how stories are structured and pick up on new things each time a familiar story is read and re-read to them. The key is to let your child take the lead in deciding what activities they want to do. “Follow the child’s lead. Go where they want to go,” says Gregg.

Laura and her husband have two children. Her husband was especially pleased when both their children said “Da Da” first.