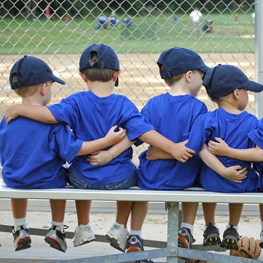 We’ve all seen it: the parent who stands on the sidelines criticizing the decisions made by coaches and officials; the one who yells at their own child when they make a mistake; the fan that hurls rude remarks to the opposing team; and the parent who always places blame. Some of us have even had the misfortune of witnessing brawls.

What’s in winning and losing?

There’s no question, winning is rewarding and boosts self-esteem. However, well-meaning parents sometimes are so caught up in the competitiveness that they lose sight of the real value of sports. Winning is not just being the victor of a game. It’s becoming the best all-around person one can be. Children who carry this with them will be the ones to prevail.

What’s in losing? Plenty. It teaches lessons in perseverance, humility, respect and acceptance of defeat.

What does losing mean? It means to come out second best. Defeat is not failure. A child or parent who walks away satisfied, whether victorious or not, is the true winner.

What else do sports offer? Opportunities to build friendships, lessons on the importance of rules, fairness and honesty, anger management and leadership skills, and how to work as a team. In short, sports teach important principles of life that will be of immense value in the years to come.

Tips for supporting your child

Make the most of your child’s involvement by showing your support and what it means to be a good sport:

Avoid pointing out your child’s mistakes or criticizing. This only serves to make kids feel worse. Your child is most likely already aware of the mistake.

Practice with your child, but don’t push. Offer pointers and demonstrate proper techniques, but allow mistakes to go without frequent correction.

Allow coaches and officials to do their jobs. If you feel an error was made, remember it’s a tough job and we all make mistakes. Realize it will probably come out in the wash.

Cheer on your child and their team.

When talking with your child about a game, point out specific displays of sportsmanship that took place to show the difference between being a good sport and being a poor sport.

If your child isn’t enjoying the sport, don’t force them to stay in it. For many children, team sports aren’t the answer. Help find another activity or a solo sport that is more suited to them.

Set up a sportsmanship recognition program for your child’s team offering Certificates of Outstanding Sportsmanship to players who set examples of being a good sport. If a child is struggling with sportsmanship, look for opportunities to help them brush up on their skills, and reward accordingly as reinforcement.

Acknowledge and show interest in team members whose abilities don’t stand out.

Read It’s How You Play the Game: Reclaiming Sportsmanship and Honor by Bobby Newman.

Kimberly writes for parenting and women’s magazines across the US and other publications.